Closed until the Shool Half Term in 2o22

UK's largest Collection of memorabilia for these two Regiments 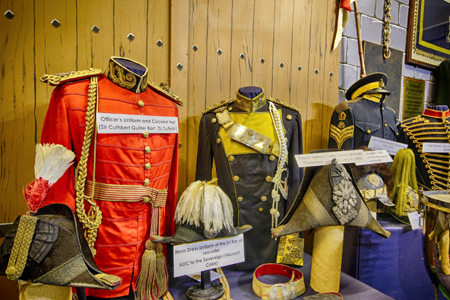 The Suffolk and Norfolk Yeomanry were each formed in the late 18th century for the purpose of defending the nation against a French invasion. Until the turn of the 20th century Yeomanry had only been called upon for home defence

During WW1 both The Suffolk and Norfolk Yeomanry saw deployment to Gallipoli, Palestine, the Western Front and France until the Armistice in 1918

At the start of WW2 in 1939 the Norfolk Yeomanry were first deployed with the British Expeditionary Force to France before evacuation through Dunkirk. They were then later sent to North Africa and in 1943 were shipped to Italy landing at Salerno before returning to England in January 1944

The Suffolk Yeomanry, by contrast, were denied active service until both Regiments were landed in Normandy in June 1944 to become part of the Allied occupying force before de-mobilisation in 1946

The separate Suffolk and Norfolk Yeomanry identities remained until 1961 when they became a joint Regiment in the Royal Artillery. In 2005 as 677 (Suffolk and Norfolk Yeomanry) Squadron, Army Air Corps they formed a unit of 6 Regiment Army Air Corps (Volunteers). They are now engaged in re-fueling and re-arming the Apache helicopters based at Wattisham airfield near Ipswich in Suffolk 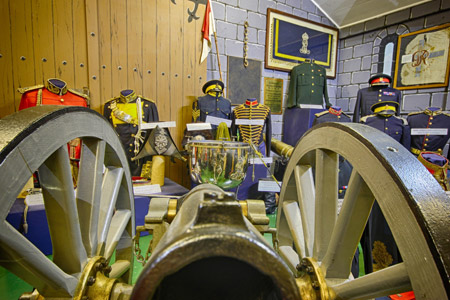 As Infantry The Suffolk & Norfolk Yeomanry’s weapons began with the Long Land Pattern Rifle ("Brown Bess") until the 1830s. They then used the British Army Pattern Minié musket before the Martini-Henry rifle was adopted in 1871. During the First and Second World Wars they had various models of the Lee–Enfield Rifle

Their role in Artillery began with the 9 Pounder field gun before moving on to the 13 Pounder and finally the 18 Pounder towards the end of WW1. When in North Africa in WW2 they used the very successful 25 Pounder field gun

After the War, while training in Germany, they had the 5.5 inch Howitzer and by 1980 were equipped with the 105mm Light Gun. Their last weapon was the FH70 155mm Field Howitzer before their Artillery role was discontinued in the early 1990s

Examples of most of these weapons can be seen in the Museum and the following video shows the 13 Pounder during a display by King's Troop, Royal Horse Artillery 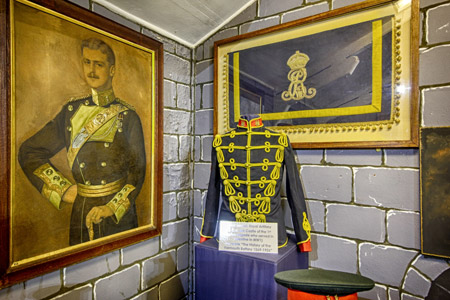 Colonel John Boag was responsible, single handily, for creating the collection of thousands of paintings and artefacts. He spent twenty years assembling memorabilia which spans the 200 year history of the Yeomanry. When the Regiment was reformed in 1947 its Honorary Colonel asked him what remained from the former Regiment and he replied “ A Quartermaster Sergeant and a cupboard of Silver”

Thus began his passion as a historian and the accumulation of records, uniforms, weapons, paintings and photographs of which only a part are on display. The Collection was first exhibited at The Muckleburgh Military Collection in 1991 where it can now be seen by the wider public