A display of famous Anti-Aircraft guns 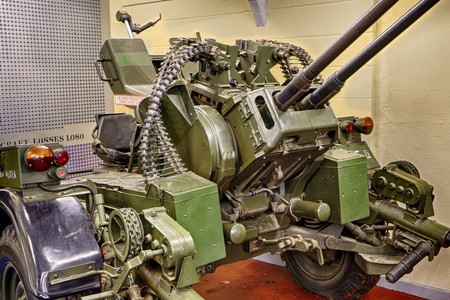 Rheinmetall of Germany made this anti-aircraft gun which was used by Argentina during the Falklands conflict in 1982. Mounted on a wheeled carriage it consists of twin 20mm guns, their ammunition, a Wankel 8 HP engine for power, and optical sights which include a design to prevent firing on friendly targets. In addition to aircraft it can also be used against ground targets

This RH 202 Mk 20 weapon was captured by British forces at Goose Green and gifted to the Museum. It has rifle damage sustained when it was captured 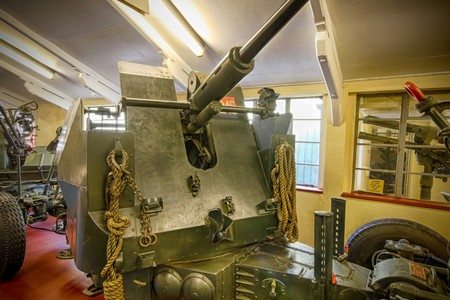 The Bofors L/70 40mm is used for engaging aircraft flying fast at low altitude. Its chief characteristics being high speeds of elevation and traverse combined with a high rate of fire

It is mounded on a detachable carriage and some models requires an electrical supply enabling them to be fired by remote control, although they can also be operated manually. Bofors anti-aircraft guns were based at Weybourne Camp 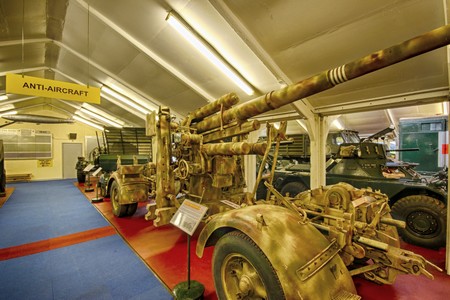 The 88mm Flack 37 German anti-aircraft gun (“the eight-eight”) was famous for its other role as an anti-tank weapon and when installed in the Tiger tank. It first appeared in the Spanish Civil War and saw service with considerable success throughout WW2 especially in North Africa

Its range, rate of fire and elevation made is superior to all other weapons of its type at the time. The Museum’s example came from the Spanish Navy and was repainted for the filming of “Band of Brothers”