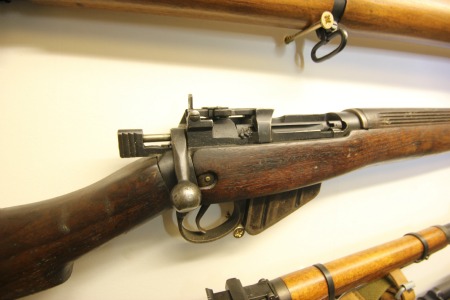 The Lee-Enfield was the British Army’s standard rifle from 1897 until 1957. It would be familiar to every soldier in WW1 and WW2 and its many models were principally made in Britain, America, Australia, Canada and India

Using a bolt action its .303 cartridge would be fired as a single round from a ten round magazine before this had to be reloaded. In trained hands it was very accurate and reliable. Like most rifles a bayonet could be attached for close quarter fighting 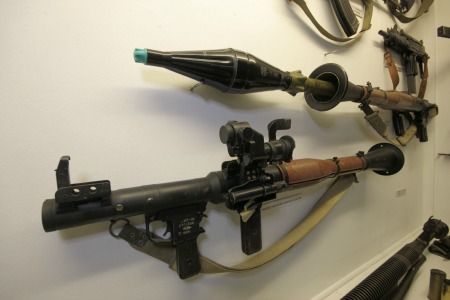 The Rocket Propelled Grenade (RPG) is a rocker powered, shoulder fired weapon with an explosive warhead. It was designed for use against armoured vehicles but is often used against other targets including slow, low flying aircraft

The Soviet Union first developed them and they have been seen in many conflicts notably Afghanistan, Africa, Vietnam, and the Middle East. The Museum’s example comes from Iraq and in the hands of terrorists RPGs can be devastating against soft targets 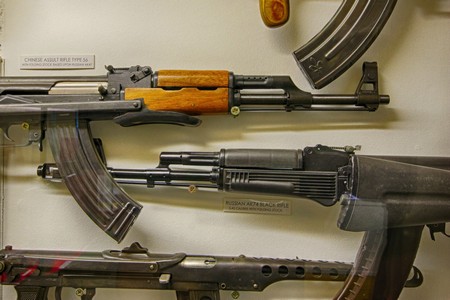 Mikhail Kalashnikov joined the Red Army in 1938 and was inspired to start constructing a new rifle.  He also began developing a submachine gun. In 1947 he designed the AK-47 (standing for Avtomat Kalashnikova model 1947).  In time the AK-47 assault rifle became the Soviet Army's standard issue and went on to become his most famous invention used arround the world

Over 100 million AK-47 Kalashnikovs have been manufactured. During a visit to Germany in 2002 he said "When I saw Bin Laden with his AK-47 I got nervous.  But what can I do, terrorists aren't fools - they too chose the most reliable guns. I am proud of my invention but I'm sad that it is used by terrorists.  I would prefer to have invented a machine that people could use and that would help farmers with their work - for example a lawnmower".   He died in 2013 at the age of 94.